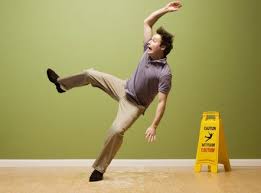 McIntosh Fleming Lawyers, specialise in no win, no fee accident claims, and we guarantee that you keep all of your compensation without any deduction for our charges.Get in touch with Derby Accident Claim Solicitors by e-mailing gary.dickie@btinternet.com , or ring us on 01332 518135 .

The claimant had attended a football match, when she tripped landing on a broken bottle, hidden within long grass, that the defendant had failed to remove. As the claimant fell her right kneecap dislocated itself, although the claimant subsequently reduced it. She attended hospital, where her knee was placed in a splint and she was discharged on crutches, which she used for some two weeks or so. She underwent physiotherapy. Her kneecap began to dislocate spontaneously on performing routine activities, such as standing, cycling or during PE. This occurred some seven or eight times. The claimant eventually underwent surgery to try and stabilise her knee. Following this she remained on crutches for some three months and was again referred for physiotherapy. By 19 months post-accident her knee had significantly improved, although there was some numbness to the scar itself. At 20 months post-accident there was a further, partial subluxation of the kneecap, although no new instances thereafter. There was a surgical scar over the right knee, some 145 mm in length and 8mm in width at the widest part. The claimant continued to complain of numbness over her scar and of being self-conscious of the scar itself, hence she tended to avoid wearing skirts. Although her knee had remained stable, she was wary of activities such as running; however, she did return to cycling. There was no residual disability of her knee and she did not complain of any ongoing pain or stiffness. Following her surgery the claimant missed some three months of school, although her parents did arrange for her to keep up with her work. The judge refused to approve an initial offer of £7,250, but did approve a revised offer of £8,250.

The claimant was slowing down in queue of traffic when a vehicle collided with the rear of her car. Shortly afterwards she developed neck and lower back pain, and later that day she took ibuprofen for the pain. Five days later she went on a pre-arranged trip to Gibraltar to visit her sister and while she was away she attended a doctor, who prescribed and administered five steroid injections, and a corset. The claimant did not work for two weeks after the accident, at which point she returned to light duties, eventually managing her normal workload three months after the accident. The most significant symptoms persisted for five weeks after the accident, during which time the claimant had difficulty sleeping and was unable to carry out her usual domestic chores or socialise as she had done before the accident. On examination four-and-a-half months post-accident, the claimant had mild tenderness with all movements of her cervical spine and some mild restriction of movement in her lumbar spine. The expert noted that the claimant had a significant history of back and neck pain, and although she had had no symptoms for some years before the accident, he took the view that she would probably be left with some form of back pain indefinitely as a result of her pre-existing state of health. He advised eight sessions of physiotherapy and gave a prognosis of a full recovery from all symptoms resulting from the accident within two to four months after having such treatment. Physiotherapy was begun at six months post-accident and resulted in a full recovery from all neck symptoms, although, as anticipated by the expert, some back symptoms remained. Allowing for the treatment to be completed in accordance with the expert’s indications, the claimant asked for an award on the basis of a 12-month recovery period for both injuries, which the judge accepted as appropriate. Awards were also made for gratuitous care and assistance for one hour per day for five weeks at a rate of £6.98 per hour, and for the flights and taxi fares incurred by the claimant when visiting Gibraltar as well as other miscellaneous expenses. General damages £3.4k.

The claimant sustained personal injury in a side-impact road traffic accident. On impact she struck her head on the centre pillar of the car. After the accident she was shocked and shaken, and began to develop immediate pain in her mouth and jaw, in the neck and shoulders, and in her left knee. She was taken to hospital and was diagnosed with a head injury, a soft tissue whiplash injury to the neck and shoulders, and a knee injury. She was unable to open her mouth properly after the accident due to heavy internal and external facial bruising. For the first two weeks post-accident the claimant was unable to eat solid food. Her food had to be blended and she had to consume it through a straw. During this time she also suffered from headaches and double vision. Due to her inability to eat properly, she was unable to go on a pre-booked weekend trip to Rome and, due to the intrusive nature of her symptoms, she took a week off work. She also suffered neck symptoms and pain across the shoulders. The neck symptoms settled within three months but the discomfort across the shoulders persisted, especially when the claimant had to lift her arms above head height. The claimant’s symptoms settled after six months. She suffered from ongoing symptoms in her left knee. On examination at three months post-accident she was unable to kneel properly on her left knee and she was unable to squat. The left knee was painful if she walked on uneven ground or after driving and sometimes the left knee would lock up. The claimant had a pre-existing underlying condition of chondromalacia patellae in the left knee. The medical opinion was that the index accident exacerbated her underlying condition for a period of six months. General damages £2.5k.

The claimant fell and struck his nose on the end of a padded seat and sustained a deep laceration to the bridge of the nose. He was taken to hospital, where the wound to his nose was glued and steristripped. For a week after the accident the claimant took paracetamol for pain relief. The wound healed steadily over a period of three to four weeks, during which time the claimant was unable to participate in his hobbies of karate and football. He was absent from school for two days. Once the wound had healed, he was left with a visible white scar in the shape of a shallow v that extended across the bridge of his nose and measured 2 cm in length. Medical opinion was that the scar was permanent. The claimant was not particularly worried about the appearance of the scar, but he was concerned about knocking the scar or bumping his nose.General damages £4.3k.