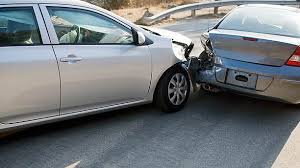 McIntosh Fleming Lawyers, specialise in no win, no fee accident claims, and we guarantee that you keep all of your compensation without any deduction for our charges.Get in touch with Derby road traffic accident claim lawyers by e-mailing gary.dickie@btinternet.com , or ring us on 01332 518135 .

The claimant sustained personal injury as a result of a road traffic accident: an injury to the head, consisting of bruising to the forehead and bleeding, bruising to the right shoulder, lower backache, a soft tissue whiplash injury to the neck and aggravation of a pre-existing right ankle injury. The injury to the claimant’s head settled within a couple of weeks of the collision. His right shoulder injury was acutely symptomatic for a few months after the accident. Within 12 months the claimant was only getting occasional clicking in the area of his shoulder. The whiplash injury began to settle down within a few weeks. Within 12 months of the accident the pain and stiffness in his neck had completely resolved. The claimant was, however, still prone to a creaking or clicking sensation, which resolved itself after 18 months. The claimant’s lower back and right ankle were especially troubling 12 months after the accident. On the recommendation of his GP the claimant undertook a three-month course of physiotherapy, consisting of 10 sessions, in order to particularly alleviate the symptoms in his lower back and right ankle. Within 21 months of the accident the claimant had recovered completely from all symptoms. General damages £4,206.31.

The claimant sustained a whiplash injury when the defendant’s car collided with the side of his car on 10 April 1995. Initially he suffered no symptoms other than shock. Later that day he began to suffer pain and stiffness in his neck. These symptoms deteriorated and he attended hospital, where he was prescribed a collar and analgesics. The neck pain and stiffness persisted and the claimant was required to take nine weeks off work. He undertook some physiotherapy. The judge found that although the accident itself would only have led to symptoms lasting about six weeks, it had aggravated a pre-existing injury. He also found that symptoms attributable to the accident lasted for a period of three months, during which time he required assistance from his mother with household chores and his personal care. The degree of care was assessed at one hour per day. General damages £2,786.3.