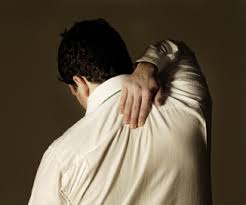 H, male, a funeral director’s assistant, who was aged 19 years old at the date of the road traffic accident and 21 years old at the date of the trial, suffered a soft tissue whiplash injury to the neck, a soft tissue injury to the right, dominant shoulder, an exacerbation injury to the low back and symptoms of psychological travel anxiety. Immediately after the accident H was shocked and shaken up. Subsequently, H developed pain in the neck, right shoulder and lower back. H saw his GP with ongoing symptoms the day after the collision. He was diagnosed with  whiplash injuries and advised to take Paracetamol for pain relief. The pain in H’s neck was associated with stiffness. The pain radiated to the right shoulder. H’s initial physical symptoms were 7 out of 10 on the visual analogue scale, where 10 is the most intense pain. H’s symptoms were acute for a period of 2-4 weeks before starting to improve. Some months before the accident H had been involved in another road traffic accident in which he suffered a low back injury. The low back symptoms were still ongoing at a modest level at the time of this accident. After the index accident H’s low back symptoms were exacerbated for a period of3-4 weeks before returning to their pre-accident level. H did not take any time off work after the accident, but he was restricted to light duties for a period of 2 weeks. On examination 6 months after the accident H continued to experience occasional neck symptoms and intermittent symptoms spreading into the right shoulder. In particular, H was tender in his right trapezius muscle. He experienced discomfort at the extremes of all shoulder movement. Specifically, H reported that if he drove for more than an hour his shoulder ached and would continue to ache until about an hour after he stopped driving. The prognosis was that H’s intermittent neck symptoms would resolve within 9 months of the accident and his residual shoulder symptoms within 14 months. At trial, H confirmed that his symptoms had resolved in accordance with the expert’s prognosis. In addition, H suffered some mild symptoms of travel anxiety for 3-4 weeks after the accident. £2900.00 awarded.