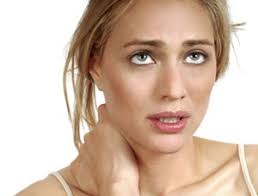 S, female, a commercial director, who was aged 36 years old at the date of the road traffic accident and 37 at the date of the trial, suffered a njury to the neck with associated symptoms radiating into the left shoulder. After the accident S immediately developed moderate symptoms of neck and shoulder pain. S was taken to Casualty where she was examined. A diagnosis of a  injury to the neck with referred symptoms to the shoulder was made. Several days later S attended her GP as her symptoms persisted. S was advised that she had suffered a injury and prescribed anti-inflammatories. Due to the persistence of her symptoms, two weeks after the accident S saw an osteopath and began a course of treatment on her neck. When S was examined 6 weeks after the accident her neck and referred shoulder symptoms were ongoing and were still described as moderate. At that point S had undergone 3 sessions of osteopathy. The osteopathy treatment was helping. Although S took no time off work her neck symptoms were aggravated in the short-term when she used a computer. In addition, S experienced discomfort in her neck and shoulder when driving, especially on reversing or on checking her blind spot. Due to her ongoing symptoms S was unable to participate in her hobby of running for 2 months post-accident. She was also unable to do any household chores, go shopping and iron for 2 months. During this period S required help from her husband. S’s sleep was disturbed for 2 months after the accident. The expert opinion was that with a further 3 sessions of osteopathy, i.e., 6 sessions in all, S’s residual symptoms should resolve within 7 months of the accident. S confirmed that her symptoms did settle in accordance with the expert’s prognosis. Award £3500.

R, an accountant, female, aged 34 at the date of the accident and 36 at the date of the disposal hearing, sustained a soft tissue injury to the neck and a flare up of a pre-existing rib pain following the road traffic accident. The day after the accident R experienced severe pain in her neck, around her ribs, hands and arms. R took the maximum dose of analgesics for 3 to 4 days.