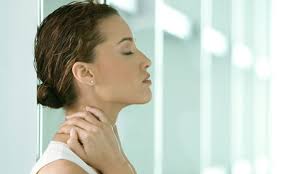 The accident occurred on 25 April 1997. The claimant was involved in a collision when a vehicle turned across the path of her vehicle, which was travelling at about 50 mph. She attended hospital, where she was x-rayed and discharged with advice and analgesia. She was unable to work for six days following the accident and was unable to drive for a period of three weeks. The claimant sustained a number of soft tissue injuries in the accident. She recovered from whiplash-type pain within two weeks and shoulder pain, chest pain and seat belt bruising within three weeks. She suffered headaches after the accident, which continued for a period of two months. In addition, the claimant bruised her knee joint, which caused her discomfort when walking and took about one year to resolve. The main physical injury was a whiplash-type injury to her lower back and five months after the accident the claimant continued to experience pain in the lumbo-sacral region. The pain was aggravated after the claimant had been sitting for any length of time, gardening or lifting anything. She underwent a course of six physiotherapy sessions and continued to do the exercises at home up to trial. The claimant avoided activities that she knew would aggravate the pain in her lower back. In particular, she was unable to enjoy her pre-accident hobbies of horse-riding, step aerobics and gardening. The claimant had substantially recovered from this injury within about two years of the accident.
The claimant also experienced a number of psychological problems following the accident, including recurrent and intrusive recollections of the accident, feeling sweaty and tense when exposed to cues reminding her of it, and persistent avoidance of things that reminded her of it, such as certain television programmes and travelling in cars. The claimant had difficulty sleeping for at least one month. She was feeling irritable and tearful on a daily basis, with impaired concentration. It took about one year before her ability to concentrate at work returned to its pre-accident level. The most significant symptom was the claimant’s situational anxiety when driving or being driven and her hypervigilance in such situations. These symptoms of post-traumatic stress disorder continued for a period of at least two months. Nearly two years after the accident, the claimant underwent a series of cognitive therapy sessions, which assisted her recovery. The claimant’s quality of life was clearly impaired for at least two years. Although no longer experiencing the other symptoms, the claimant continued to experience situational travel anxiety at trial. Although the claimant coped, it was disagreeable for her and her family with whom she travelled.Total Damages awarded £10,220.00.

Claimant was rendered unable to lift weight, had difficulty performing household chores and experienced pain above nuisance level. These symptoms were found to be permanent and would slightly handicap claimant on the open job market.
Facts
On 3 August 1999 the claimant sustained a whiplash injury after the defendant’s vehicle collided into the rear of hers. She suffered shock that lasted one day, pain in her legs lasting about two days, and lower back pain that lasted approximately two weeks. The most significant symptom was neck pain that radiated into her right shoulder. It was severe for about one month. The claimant wore a collar for a week and took analgesics. She took three weeks and two days off work. For the first month she was unable to perform domestic chores. After a month the neck symptoms began to improve; however, they persisted and even at trial they remained at above nuisance level. The pains were constant, but were worst in cold weather and in the morning. The claimant had difficulty sleeping on her right side. She could not engage in her pre-accident hobbies of badminton and indoor cricket. At work she had difficulty in lifting weight or sitting still for long periods. At home she had difficulty in using a vacuum cleaner, ironing and cleaning windows. The prognosis was that the claimant’s neck symptoms were permanent, but were unlikely to deteriorate. The claimant also complained of mild psychological sequelae in the form of nervousness as a driver. The judge found that the injury fell at the very bottom end of bracket (b)(i) of the JSB Guidelines (5th edition) dealing with neck injuries. The judge also found that her restriction in lifting weight would slightly handicap her on the open job market. Total Damages awarded £8,219.59.