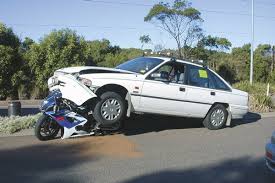 The claimant’s motorcycle collided with another vehicle. The motorcycle went under the other vehicle and the claimant fell to the ground. The claimant was taken by ambulance to hospital, where x-rays were taken that excluded the possibility of bony injuries. Soft tissue injuries to the neck, left shoulder, left knee and hips were noted. He was in shock for a day and experienced flashbacks of the accident for three days. Two days after the accident he attended his doctor, who prescribed painkillers. The claimant was in constant pain for two weeks after the accident and took three weeks off work as a result of his injuries, before returning to his normal duties. When the claimant was examined at three-and-a-half months post-accident, he reported that his injuries had resolved in full within six weeks of the accident, but in his witness statement said that after that time he was still suffering from residual symptoms. The judge said that, as the medical examination took place almost a year before the witness statement was compiled, he preferred the evidence of the medical report and assessed the claimant’s injuries on the basis of a six-week resolution. General damages £1,793.64.

The claimant, a construction worker, was sitting in the driver’s seat of his stationary car when it was struck from behind by the defendant’s car. The claimant, who was wearing a seat belt, was thrown backwards by the impact, and his head collided with the head restraint and his back with the seat. He began to experience pain in the lower back within hours of the accident, which became progressively worse. He attended an out-of-hours doctor two days after the accident. The pain was constant for a couple of weeks. He attended his GP again about four-and-a-half weeks post-accident complaining of shooting pains occurring on and off since the accident and displaying tenderness in the lower back. The claimant consulted a chiropractor seven weeks after the accident. He received eight sessions of treatment in total, with the last session occurring almost eight months post-accident. Initially he found that the chiropractic treatment provided relief from his symptoms for only a couple of days after each visit. As time went on, these periods of relief lengthened and his symptoms became more intermittent. At six months post-accident the pain in his lower back was less serious and occurred less frequently, although it was more apparent in the morning and after a day’s work. On examination at seven-and-a-half months post-accident by the medico-legal expert, the claimant displayed no objective clinical signs of injury and told the expert that he expected to make a full recovery in the near future.

The claimant suffered a quite severe generalised headache that arose immediately after the accident and then lasted for several days. In the medico-legal expert’s opinion these arose from a soft tissue injury to the neck. The claimant took a few days off work after the accident, following which he was confined to light duties for a further few days. He experienced continued difficulties when stretching at work one month post-accident. Before the accident, the claimant had attended a gym two or three times a week, but was unable to do so for two weeks post-accident and then restricted to light training, returning to his pre-accident level of activity five weeks after the accident. He also rode a motorcycle as a hobby and was unable to do so for long stretches at a time as a result of his injuries. The medico-legal expert predicted that the claimant would recover within 9-12 months of the accident. Taking into account the absence of signs of injury when the claimant was examined by the medico-legal experts, and the fact that the last chiropractic treatment took place shortly after it, the judge assessed damages on the basis of an injury lasting nine months, although he accepted that the claimant’s initial symptoms and loss of amenity had been severe. General damages £2,662.93.