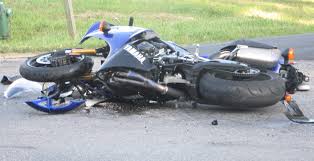 The claimant was injured when the defendant drove his car out of a side road and collided with the claimant’s motorcycle . The claimant was knocked to the ground and taken by ambulance to the local hospital, where x-rays revealed a displaced fracture of the left distal fibula at the ankle. He also sustained a soft tissue injury to the base of the left thumb and a strain to the stomach muscles. A plaster cast was applied to the ankle and he was able to move on crutches. As a result of living in a top-floor flat with no lift, he had to crawl up and down the stairs. The plaster cast remained in place for six weeks and he was off work for that period. It was a further four weeks before he returned to full duties at work. He underwent five sessions of physiotherapy after the plaster cast was removed. At seven-and-a-half months post-accident he had ongoing intermittent problems with his left ankle in the form of swelling and pain. If he worked for eight to nine hours a day he would experience bruising and develop a limp by the end of the day. He had not returned to running or playing football at that time and experienced ongoing nervousness when riding his motorcycle The examination at that time revealed discomfort on compression of the left ankle and a slightly larger ankle circumference on the left. The soft tissue strain to the stomach muscles settled in a period of four to five weeks post-accident, the soft tissue injury to the left thumb/hand settled in six weeks and the prognosis in relation to the left ankle was for symptoms to settle within 12-18 months of the accident. The claimant’s evidence was that his symptoms had not quite settled at 18 months post-accident. General damages £5,492.22.

The claimant suffered a soft tissue injury to the head, a soft tissue ligamentous injury to the neck and a soft tissue ligamentous injury to the right (dominant) arm, when he was knocked off his motorcycle . He reported pain to the right side of his head where it had struck the carriageway, to the neck and to the right arm. A bandage and sling were applied to the arm and he was advised to rest and take painkillers. He had not been knocked out after the accident; however his motorcycle helmet had suffered some damage. He experienced a bad headache for an hour and felt generally nauseated after two hours. He began to develop stiffness and pain in the right side of the neck, radiating to the right shoulder. The pain was acute for two weeks and then became milder. He also developed travel anxiety after the accident. He felt unable to ride his motorcycle  or drive for a week afterwards. The symptoms then began to improve following greater exposure as his confidence grew. He was absent from work on account of his symptoms for three weeks. He was also unable to pursue his hobby of glass engraving for two months as he could not bend his neck. Also he was unable to attend the gym for several months. On examination at three months post accident he still felt neck pain and stiffness most mornings. Medical opinion was that these residual symptoms would resolve within seven months of the accident. In addition the claimant reported ongoing mild pain in his right arm on examination. General damages £1,871.56.