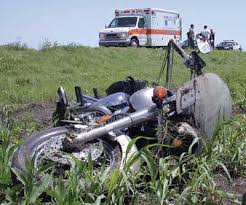 The claimant suffered multiple injuries when he was caused to fall from his motorcycle by the defendant’s vehicle. The claimant fell onto his left side, suffering soft tissue injuries to his left knee and left wrist and calf. The claimant attended his GP within a week of the accident and again around 4 weeks later as a result on ongoing symptoms. The claimant was prescribed Ibuprofen and given exercises to undertake at home. The symptoms of pain in the knee and wrist were constant for 6 weeks at which point they became intermittent. He also suffered some psychological effects and lost confidence riding for a period. On examination at 5 months post accident, he was tender over the anatomical snuffbox of the left wrist and tender over the patella of the left knee. The prognosis for recovery from the physical injuries was a further 3–6 months, ie by 8–11 months, so by 13–14 months post accident. The claimant gave evidence that it took 12 months or so to recover from the knee and wrist injuries and 15 months from the psychological effects. The claimant was awarded a sum comprising £2,750 in respect of the knee, £2,500 in respect of the wrist and £1,500 in respect of the psychological effects, with the total being reduced to reflect overlap in the pain, suffering and loss of amenity. General damages £6,250.23.

The claimant, a student, suffered injuries to his wrist and knee when knocked from his motorcycle in a road traffic accident. Following the accident the claimant was taken to hospital where he was x-rayed and examined before being discharged with a wrist support, having been diagnosed with a soft tissue injury of the left wrist and abrasions to the right knee. He had difficulty using his left hand for the first couple of weeks following the accident and was away from university for one day due to pain radiating up the anterior aspect of his left arm and in his wrist. The claimant consulted his GP two months after the accident as a result of ongoing pain in his wrist and was prescribed anti-inflammatory medication. The claimant was unable to participate in climbing for three to four months. The knee symptoms resolved in around two months post-accident. When seen by an expert for the purpose of the proceedings nine months post-accident, he still had ongoing pain in his left wrist. The examination at that time revealed pain on resisted movement of the left thumb, slight pain on other movements of the wrist, discomfort over the radio-carpal and ulnar carpal joints and over the flexor tendons of the left forearm. The prognosis was for a recovery from the remaining wrist symptoms by one year and three months post-accident. The claimant was awarded £2.000 in respect of the knee, £600 in respect of the wrist and then reduced by 15 per cent to reflect the overlap in pain, suffering and loss of amenity. General damages £2,371.1.