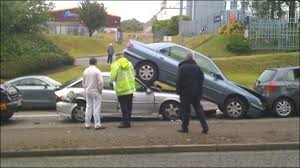 The claimant, a housewife, was the passenger in a car that was struck by the defendant’s van. She cut her right shin in the crash. This left a 4 cm scar that gradually faded over three-and-a-half years. During its subsistence she was embarrassed to wear shorts and skirts. She also sustained a whiplash to the lumbar spine that gradually became better over 18 months. At trial she only experienced neck symptoms when turning her head to reverse her car. She also had a soft tissue injury to L2 to L5 of the lumbar spine. Her symptoms were initially relentless but soon settled down until there were only occasional flare-ups of pain, the last of which occurred six months before trial when vacuuming. She remained careful when undertaking chores and looking after her children. Physiotherapy and osteopathy treatment had helped and at trial she described herself as 80% recovered. She had had back problems during her first two pregnancies and was wary of trying for a third child because her spine remained vulnerable to further injury. Surgery was not indicated. General damages £9,416.36.

The claimant sustained soft tissue injuries to her neck and lower back in a motorway accident. She initially wore a cervical collar and underwent physiotherapy. One year after the accident, she continued to suffer from continuous pain at the back of the neck and the lumbar spine, together with monthly headaches. Three years after the accident, episodes of neck pain were occurring only once every three or four months, and the claimant suffered back pain only occasionally (when ironing for more than two hours). A full recovery was expected within a further few months. The accident triggered an episode of depression, to which the claimant was vulnerable, but she was no longer depressed at the time of the assessment. She remained nervous driving and had not driven on motorways in the three years since her accident. General damages £6,881.19.

The claimant was injured when the bus on which he was travelling was in a side-on collision with another vehicle. The bus turned over on its side. He was thrown off his seat onto the floor and then onto the side. As a result of the rotation he sustained flexion and extension movements to the neck. He was admitted to the local A&E department, where he was diagnosed as suffering from a whiplash

injury. He was also distressed and anxious. His mother was also injured in the accident. His injury was treated conservatively.

At two and three months post-accident he experienced ‘flare-ups’, which interfered with schoolwork and sport at school, but 10 months post-accident he was symptom-free. He had experienced ‘flashbacks’ during the first week after the accident, but these had resolved. At the time of the hearing, however, he was still wary of travelling by bus. General damages £3,911.41.