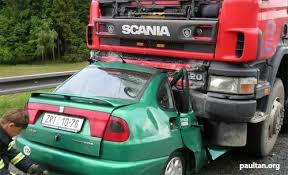 The claimant was involved in a road traffic accident when a lorry collided with the rear of his car, knocking him out. He was taken to hospital, where x-rays and examination revealed a fracture to the right scapula, a whiplash injury to the neck and a cut behind his right ear, within the hairline, which subsequently healed without difficulty. He suffered headaches for two weeks after the accident and underwent a course of physiotherapy over 18 months, which included ‘cranio-sacral therapy’. The shoulder fracture largely resolved, but the claimant continued to experience some related pain in his neck, which was likely to continue at the same relatively low level. The whiplash -related neck injury settled within a year and any ongoing problems were attributable to natural degenerative changes in the neck rather than to the accident. The claimant was unable to work for five-and-a-half months after the accident. His job involved climbing down ladders to inspect sewers, which were 3-4 feet high, and required him to bend over in order to inspect them, and he was only able to return to light duties after his absence. He also experienced difficulties in carrying out household tasks for the first two months after the accident. He was initially unable to return to his hobbies of golf, snooker and pool, and when he did return to participating in them, he found that his golf handicap had increased. Furthermore, he was unable to drive for four months after the accident. In addition to the above, the claimant was diagnosed as suffering from an adjustment disorder with mixed anxiety and mood disturbance for a period of three months. He experienced some sleep disturbance and claustrophobia. His symptoms improved gradually and, three years after the accident, his acute stress symptoms, mood disturbance and travel anxiety had all improved such that there were no residual psychological symptoms of clinical significance. No treatment was recommended and any residual mild passenger anxiety had resolved within three-and-a-half years of the accident. General damages £8,270.13.

The claimant was involved in a road traffic accident in which she sustained a soft tissue contusion to the knee, which caused swelling for six days. After the accident, she suffered continued discomfort when walking and driving, and was aware of a clicking sensation in the knee. The knee continued to cause problems for up to four years post-accident. The claimant’s neck and back also became increasingly stiff, sore and painful after the accident and she was diagnosed as having sustained whiplash injuries. Symptoms were acute for 8-10 days before gradually improving, but the claimant was left with intermittent symptoms. She attended both physiotherapy and a chiropractor. She experienced intermittent pain and discomfort in her lumbar spine, which was particularly aggravated by driving, and constant daily pain and stiffness in her neck and upper thoracic spine, which referred pain at the base of her neck into her left shoulder. Intermittent headaches were also a problem. The claimant was left with permanent residual symptoms in both her cervical and lumbar spine, together with an increased frequency of headaches. She required assistance with housework, particularly with the heavier tasks of ironing and vacuuming. She also required help in caring for her young children: she was unable to lift or bathe them, and using their buggy and breastfeeding aggravated the pain in her back. In addition she suffered a mild psychological response to the accident. She experienced flashbacks for the first five days afterwards, together with nightmares and sleep disturbance for a week. She was anxious and tearful for six weeks and also suffered panic attacks over a similar period. Thereafter the psychological symptoms ameliorated. A settlement was reached before going to trial. General damages £12,570.6.