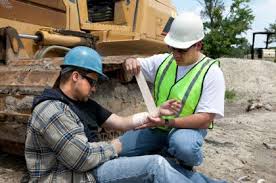 The claimant fell off a tractor unit that was moved as he was in the process of uncoupling it, sustaining a fracture of the left tibia and fibula in the process. The injury necessitated the insertion of a nail. The claimant was non-weight-bearing for about three months and needed to use a stick or crutch for a further three to four months. On examination at one year post-accident he was still experiencing a considerable amount of pain and discomfort together with limitation of mobility. He underwent an unsuccessful operation for the removal of the nail at 20 months post-accident. The nail was finally removed after a prolonged operation and with some difficulty at two years post-accident. At the time of a further examination three-and-a-half years after the accident the claimant was still suffering from significant pain around the anterior aspect of his left knee, the lower third of the tibia and the left ankle, which was having a significant impact on his employment, hobbies and day-to-day living. The symptoms were considered to have plateaued at that time and it was considered unlikely that there would be any further improvement or deterioration in the future. As a result of the injuries the claimant had been unable to resume his pre-accident employment as a farm worker and had been forced to find work in a fibreglass factory . The judge commented that the injuries did not fall neatly within JSB categories L(c)(i) or L(b)(iv) because while none of the aggravating features of the latter were present, the claimant was in constant pain. General damages of £17,500 were awarded.

In an accident at work the claimant struck his left dominant hand against a stack of baskets and suffered bruised knuckles. His skin was not broken but he attended the first aider, who applied ice. Over the next few days the hand became very swollen, although this eased when the claimant elevated and manipulated it. His hand remained stiff but he continued to work His hand function was diminished for six weeks: he was unable to play squash during this period and avoided household jobs. On examination 27 months after the accident the claimant complained of a dull ache in the metacarpal phalangeal joint in damp weather. The medical expert concluded that the normal working function of the hand was not affected at the date of examination and in so far as the claimant might be experiencing residual symptoms, these should resolve. Award £970.00.