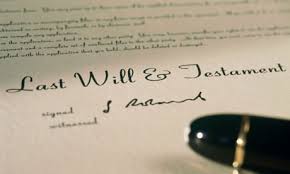 We  charge only £50 to prepare a will and are happy to visit you at home to take instructions . We are also a low cost , £725 fixed price , Derby probate service providing a high quality service .

A will cannot be made by someone who is a a minor , nor by persons who are not of sound mind, memory and understanding.

The test for mental capacity has previously been established by a series of judicial decisions. The Mental Capacity Act sections 1-4 of which were brought into force on 1 April 2007, puts the test for mental capacity on a statutory footing. The starting point should be that there is a presumption of capacity: s 1(2); this reflects the common law presumption.The Act is not retrospective and is of no consequence in considering the validity of wills made prior to 1 April 2007.

Lack of capacity is catered for in s 2:

‘For the purposes of this Act, a person lacks capacity in relation to a Matter if at the material time he is unable to make a decision for himself in relation to the matter because of an impairment of, or a disturbance in the functioning of, the mind or brain. It does not matter whether the impairment or disturbance is permanent or temporary.’

‘For the purposes of section 2, a person is unable to make a decision for himself if he is unable—

(a)     to understand the information relevant to the decision,

(d)     to communicate his decision (whether by talking, using sign language or any other means).

That is qualified by the remainder of s 3 so that:

‘(2)      A person is not to be regarded as unable to understand the information relevant to a decision if he is able to understand an explanation of it given to him in a way that is appropriate to his circumstances (using simple language, visual aids or any other means).

(3)      The fact that a person is able to retain the information relevant to a decision for a short period only does not prevent him from being regarded as able to make the decision.

A will made by a person of full capacity is not revoked by the fact that he subsequently becomes incapable of making a will .

A will made at a time when the testator  is incapable of making a will is not rendered valid by the fact that the incapacity ceases during his , unless the will has been re-executed after such cesser.